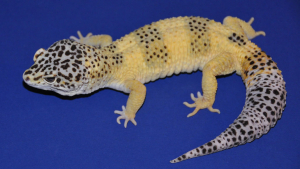 By studying a colony of geckos descended from one named Mr. Frosty (pictured), researchers identified the gene behind these lizards’ skin tumors.

A gecko named Mr. Frosty and his kin have helped scientists uncover the genetic glitch that gives these lizards their standout color — and their high risk for skin tumors.

The geckos are a variety of leopard gecko (Eublepharis macularius) called Lemon Frost, which sports stark white skin that not only highlights its yellow coloring, but also tends to develop tumors. A new study pegs these Lemon Frost traits to a single gene that has also been implicated in the skin cancer melanoma in people (SN: 3/1/19).

“It was extremely exciting that they could link the Lemon Frost characteristics to a specific region of the genome,” says Ylenia Chiari, an evolutionary biologist at George Mason University in Fairfax, Va., who wasn’t involved in the work. “Studying a gecko is not only about the gecko’s health or about understanding basic biology, but could also provide key information to further research on other organisms, including humans.”

Over the last few decades, reptile breeders have produced a wide variety of leopard geckos, ranging from vibrant orange to black or spotted to striped. “It’s just amazing that one particular species can display such a variety of different colors and patterns,” says Longhua Guo, a geneticist at UCLA. Curious about the genetics underlying this rainbow of reptiles, Guo first visited a gecko breeding facility in California in 2017.

“It has shelves and shelves of cages, and you can hear crickets everywhere, because they feed these geckos crickets,” says Guo, who was immediately charmed by the colorful creatures. “They are very gentle and docile. You can hold them on your hand, and they just look at you with their big googly eyes, and their mouth always looks like they have on a big smile.”

The owner of the facility, Steve Sykes, had bred a whole spectrum of leopard geckos. But he was particularly concerned about his Lemon Frost variety. After purchasing a Lemon Frost gecko named Mr. Frosty at a reptile auction, Sykes had bred Mr. Frosty with various female leopard geckos to establish a colony of more than 900 lizards. But more than 80 percent of the Lemon Frost geckos developed tumors made of white skin cells before the reptiles were 5 years old. In some geckos, the tumors grew into large bulges that could make it difficult for the animals to move and could get infected if ruptured. 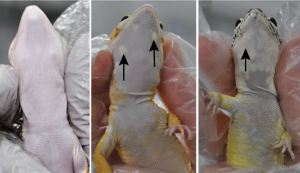 To uncover the gene responsible for the tumors, Guo and colleagues collected DNA from lizards’ saliva. The researchers deciphered the genetic makeup of about 30 geckos that inherited the Lemon Frost traits from both parents, over 100 others that inherited the traits from only one parent and nearly 40 non–Lemon Frost geckos. Comparing the genetic material of these geckos allowed the team to trace the Lemon Frost tumors and coloring to a mutation on a gene called SPINT1.

This gene has not only been linked to cancer in humans, but also with tumor formation in fish and mice. This offers further evidence that SPINT1 is responsible for tumor growth in Lemon Frost geckos, says study coauthor Leonid Kruglyak, a Howard Hughes Medical Institute investigator also at UCLA.

In the reptiles, the mutation may cause an overproduction of white skin cells, giving the geckos both their signature frosted appearance and liability to develop tumors.

Questions or comments on this article? E-mail us at feedback@sciencenews.org

This article was published in ScienceNews.