The Catalyst and Legacy awards recognize Faculty members who are highly accomplished graduates of the MBI Doctoral program (Catalyst award) or long-standing members of the MBI who have had a transformative impact on research and teaching at UCLA (Legacy award). The awards are presented at an annual dinner held at UCLA, where friends and family of the awardees, UCLA Faculty, campus leaders and supporters can celebrate the contributions of the MBI and it’s members to the scientific community.

For details of the next Catalyst and Legacy Award ceremony, click here. 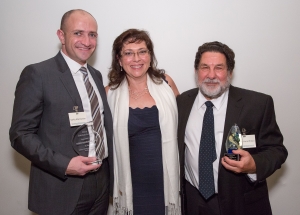